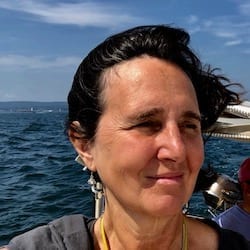 Rebecca Schneider, Professor of Modern Culture and Media at Brown University, teaches Performance Studies, Prehistory of the Screen, Intermedia, and studies Black Feminist Thought. Books include The Explicit Body in Performance (1997), Performing Remains: Art and War in Times of Theatrical Reenactment (2011), and Remain with Jussi Parikka (2018). Over fifty essays include “Slough Media,” “That the Past May Yet have Another Future: Gesture in the Times of Hands Up” (Best Essay award, ASTR), “Solo Solo Solo,” “It Seems As If I am Dead: Zombie Capitalism and Theatrical Labor,” and “Off Watch” in Unwatchable. She has been a Mercator Fellow at Goethe University and a Distinguished Visiting Professor at Queen Mary, University of London. As a "performing theorist," she has collaborated with artists at the British Museum in London, the Mobile Academy in Berlin, the Tanzquartier in Vienna, the Gulbenkian in Lisbon, and presented solo criticism at museums, universities, and galleries around the world. “This Shoal Which is Not One: Island Studies, Performance Studies, and Africans Who Fly” appeared in Island Studies and with this fellowship she will go to sea again on a book titled Shoaling in the Sea of History: Littoral Dance in the Wake of Slavery’s Capitalism.