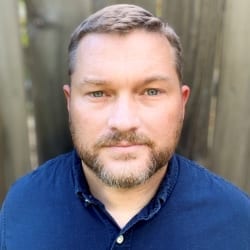 Reece Jones is a political geographer who studies immigration restrictions and border violence. He is a Professor and the Chair of the Department of Geography and Environment at the University of Hawai‘I and the Editor-in-Chief of the journal Geopolitics. Jones is the author of Border Walls: Security and the War on Terror in the United States, India, and Israel, which won the 2013 Julian Minghi Distinguished Book Award for best book in political geography from the American Association of Geographers, and Violent Borders: Refugees and the Right to Move, which won the 2017 award for best book in political geography from the Royal Geographical Society. He has published four edited books, two dozen journal articles, and opinion pieces in the New York Times and the Guardian. His upcoming book, White Borders: The History of Race and Immigration in the United States from Chinese Exclusion to the Border Wall, will be published in September by Beacon Press. He will use the fellowship to write Nobody is Protected: How the Border Patrol Became the Most Dangerous Police Force in the United States, which will be published by Counterpoint Press in summer 2022. To learn more, follow him on Twitter.