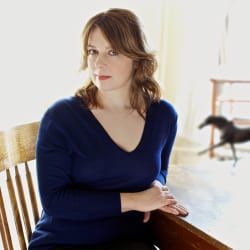 René Steinke is the author of three novels, The Fires, Holy Skirts, and Friendswood. She grew up in Texas and has lived in New York City since 1994.

Steinke’s most recent novel, Friendswood (Riverhead Books, 2014), was named one of National Public Radio’s “Great Reads of 2014” and was shortlisted for the St. Francis Literary Prize. Friendswood, partly inspired by the small town where Steinke grew up, explores the lives of four characters in the aftermath of a long-ago environmental disaster.

Steinke’s second novel, Holy Skirts (William Morrow, 2005) was a finalist for the National Book Award. Holy Skirts is a historical novel based on the life of the Baroness Elsa von Freytag-Loringhoven, an artist and poet of the Dada movement, who made her mark in Greenwich Village circa World War I. Holy Skirts was also included among the Best Books of the Year by the Chicago Tribune and the Washington Post, and it has been published in Spanish and Italian translations.

Steinke’s writing has been published in The New York Times, The Literary Review, Vogue, Salon, TriQuarterly, Bookforum and elsewhere.

In 2013, she was a judge for the National Book Award. She has also served as a judge for the Center for Fiction’s First Novel Prize and for the PEN Literary Prize for Biography. The former Editor of The Literary Review, she now serves as Editor-at-large.