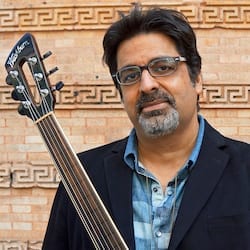 Guitarist and composer Rez Abbasi is among a rare breed of artists that continue to push boundaries while preserving the traditions he has embraced. Consistently placing on DownBeat’s International Critics Poll alongside luminaries Bill Frisell and Pat Metheny since 2014, Abbasi continues to forge new ground with his multi-dimensional projects. Born in Karachi, Pakistan, migrating to Southern California at the age of four, schooled at the University of Southern California and the Manhattan School of Music in jazz and classical music, along with a pilgrimage in India under the guidance of master percussionist, Ustad Alla Rakha, Abbasi is a vivid synthesis of all the above stated influences and genres.

With fifteen albums and multiple composition grants, Abbasi’s wide-ranging projects continue to capture provocative sounds rarely heard in today’s music. His recent Django-shift, recasts legendary guitarist Django Reinhardt’s lesser-known compositions into a modern light. In 2019, commissioned by the New York Guitar Festival, he released his live score to the 1929 Indian/German silent film A Throw of Dice. In 2018, his long-standing group featuring band-mates Vijay Iyer and Rudresh Mahanthappa released Unfiltered Universe, the third in a trilogy of albums that set out to explore South Asian musical influences with jazz.