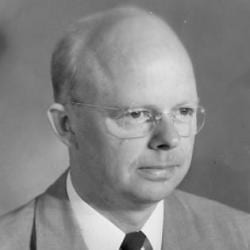 Richard C. Rudolph, described recently as "the father of Chinese studies at UCLA," died April 9, 2003, just a few weeks short of his ninety-fourth birthday. While such an age is not a remarkable thing, his life was. Born in San Francisco shortly after the great earthquake, raised by a grandmother who was herself orphaned when her parents were killed by Indians while coming to California by wagon train, of such limited means that as a young boy he had a job lighting the street lights of the small California town in which he was raised, and forced for a time to live in a water tower and later a dirt-walled basement while putting himself through fourteen years of the university during the Depression, he was often asked why he went into Chinese studies. Never interested in talking about himself, he would always joke that Chinese was the only field in which he could get financial support—though he told his own children that he had been deeply attracted to Chinese culture ever since he was young, when he used to hide and read about China during a job he had at the Carnegie library in his hometown. (He had, in fact, begun his college career quite successfully in pre-med, and received his B.A. from UC Berkeley in what was then called Foreign Trade.)

His professional career all but began with his first trip to China in 1948–49, just before it closed with the Communist Revolution, and more or less ended with his second trip in 1973 as a member of the first group of American scholars to enter China before the normalization of relations. This closing of China during virtually his entire professional life was a deep disappointment to him, almost a personal tragedy, and one he compensated for to some degree with a love of Japan that lasted his whole life. He was a bibliophile and a linguist at heart, being fluent in Classical Chinese, Mandarin, Manchu, Mongolian, Classical Japanese, modern Japanese, German, French, Italian, and Spanish—and having begun but never mastered Tibetan and Russian.

Rudolph received his Ph.D. in Chinese literature from Berkeley in 1942, studying with the famous sinologists Ferdinand Lessing and Peter Boodberg. He saw very little of his father throughout his life (though his free-spending and at times wealthy father did pay enough attention to disinherit him for going into Chinese studies), and Lessing was himself estranged from his own son when the son joined the Nazi party (the son was later executed by the Nazis in the last days of the war). Something of a father-son relationship developed between the two and Rudolph often fondly recalled the Mongolian language recordings Lessing thoughtfully made for him when he was recruited by the OSS during the Second World War for a mission to Mongolia, which, instead of "Hello," began with "Call off your dogs, I come in peace" (a major motion picture was later made of this mission). Perhaps wisely, he eventually accepted instead a position as head of the Chinese section of the U.S. Navy Language School at the University of Colorado, where he worked with Ensho Ashikaga and Y. C. Chu, lifelong friends who would later come to UCLA, and where he met Mary Alice Potter, his wife of fifty-nine years.

From 1945 to 1947, he served as Acting Director of the School of Chinese Studies at the University of Toronto and Assistant Keeper of Far Eastern Antiquities at the Royal Ontario Museum of Archaeology, an experience that instilled in him a lasting love of ancient books, calligraphy, paintings, and artifacts (his house was a heap of these things). Offered his choice in 1947 of either a position at Berkeley or the opportunity to found a new department of Oriental Languages at UCLA, he enthusiastically chose the latter, and remained at UCLA throughout his career.

Almost immediately after coming to UCLA, Rudolph was awarded a Fulbright for research in China. This was for 1948–49, the culminating years of the Chinese Revolution. Always staying just astep ahead of the advancing Communist army—several of his friends who neglected to do this were either executed or spent the rest of their lives in prison—he managed to excavate an early seventeenth-century official’s tomb at Xining (Qinghai), in northwest China, and to study the cliff tombs of Sichuan. Shot at on one occasion, threatened with death on another, and left for dead when very sick on another still, his adventures are too numerous to relate here (he was once approached to sell the movie rights to this academic research trip). Unwilling to surrender a minute, his was the last plane out of Chengdu, headed for Guangzhou. When he finally reached Hong Kong, bodies were already floating down the Pearl River.

But as he always remembered it himself, it was book buying that was the greatest adventure of this journey to China. When he left UCLA, the university library possessed but a single volume in Chinese: a Shanghai telephone directory. By the end of that research year, it had 10,000—some of them rare, many of them important, all of them needed—the core of a functioning research library that is currently among the top ten East Asian libraries in the U.S. A true bibliophile, he was never happier than when examining some rare book or manuscript—or a number of works by some famous Chinese calligrapher, separated for centuries and now brought together again by him after years of tireless searching—unless it was when he was showing someone else these latest finds. He was always as well acquainted with the campus librarians as he was with his fellow scholars.

Rudolph was best known for his work on the famous tomb reliefs of the Western Han (Han Tomb Art of West China). But he also worked on a wide range of interests including the history of Chinese printing (A Chinese Printing Manual), ancient Chinese archaeology, ancient Chinese historiography, literature, bronzes, tomb objects, tomb iconography, the salt industry, botanical works, medicine, riddles and games, the application of carbon dating to ancient Chinese artifacts, Chinese porcelain in Mexico, early (14th century) Italians in China, Manchu studies, Japanese maps, and the work in Japan of the Swedish naturalist Thunberg. He co-authored what was probably the best textbook on literary Chinese of its time (Literary Chinese by the Inductive Method). One of the few Western scholars who kept systematically abreast of ongoing archaeological efforts in China, he was asked to direct the American Council of Learned Societies important project “Abstracts of Chinese Archaeology” from 1968 to 1973.

Before his retirement in 1976, he served as departmental chair for sixteen years and sat on many editorial boards. He was awarded two Guggenheim fellowships (plus one renewal), two Fulbright fellowships (plus one renewal), a Fulbright Distinguished Senior Scholar Award, two American Philosophical Society Grants, a University of California Humanities Institute Award, a Ford Foundation Grant, and an ACLS fellowship. But the honor that he was most proud of was when, in 1981, the UCLA Oriental Library was renamed the Richard C. Rudolph Oriental Library in acknowledgment of his untiring efforts in building the collection (it was renamed the Richard C. Rudolph East Asian Library in 1990). Never a person who sought personal recognition, he remained deeply touched by this for the remainder of his life.

With retirement, Rudolph took up the direction of the UC Education Abroad Program in Hong Kong and continued his research. But he became increasingly absorbed with collecting ancient maps, paintings, printing blocks, manuscripts, and rare books—even a little porcelain—focusing especially on Chinese and Japanese printing, medicine, botany, physiology, and the reception of Western science by the East. Radically failing eyesight became a great frustration to him, as did a seemingly unending succession of life-threatening but largely passing ailments, his phenomenal resistance to which constantly amazed his doctors.

To the end, he remained a scholar, devoted to learning and to Asian culture. In the most idealistic way, he was completely devoted to UCLA as a specifically public institution of higher learning, and would have been very pleased at the words recently written about him by a colleague, "there is much of him that is still very much alive at UCLA."