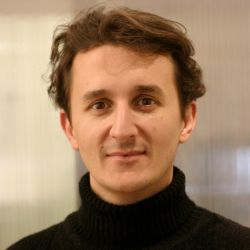 Richard Carrick writes music of spatial depth and robust stasis, characterized by continual development and the evocation of profound human experiences. Described both as “charming, with exoticism and sheer infectiousness” and “organic and restless” by The New York Times, Carrick’s music is influenced by his multicultural background and experiences as well as his commitment to inspire professionals, audiences and youth through composition. Carrick invokes inspiration from concepts such as symmetry, spatial dimension, and transformation, and composes through process, invention, improvisation, and the incorporation of multimedia elements.

Frequently commissioned, Carrick is at work on an upcoming commission from the Fromm Foundation for the MIVOS Quartet and a new solo work for Marilyn Nonken. He has been programmed and presented internationally at festivals including ISCM World Music Days-Switzerland, Mid-American New Music Festival, and Darmstadt Summer Festival, and performed by musicians including the JACK Quartet, Nieuw Ensemble, Sequitur Ensemble, Tony Arnold, Magnus Andersson, Steven Schick, Rohan de Saram, and others.

Carrick is co-founder and co-artistic director of the contemporary music ensemble Either/Or, declared ‘first rate’ and ‘a trustworthy purveyor of fresh sounds’ by The New York Times, and winner of the Chamber Music America/ASCAP Award for Adventurous Programming. As conductor and pianist, Carrick has worked with many celebrated composers including Helmut Lachenmann, Jonny Greenwood, Chaya Czernowin, Elliott Sharp, George Lewis, Alvin Lucier, and Rebecca Saunders. Carrick conducting E/O’s ambitious presentation of John Cage’s Party Pieces brought together 125 renowned composers from around the world.

Carrick recently taught composition at Columbia and New York Universities and has presented masterclasses and lectures throughout the US, Europe, and Asia. He is a cornerstone of the teaching artist faculty for the New York Philharmonic, through which he has mentored hundreds of young composers internationally.

Born in Paris of French-Algerian and British descent, Carrick received his BA from Columbia University, PhD from the University of California-San Diego with Brian Ferneyhough, and pursued further studies at IRCAM and the Koninklijk Conservatorium in The Hague. Recent works distributed by Project Schott New York.