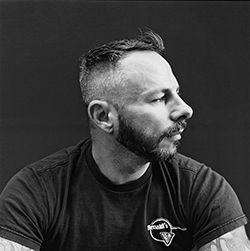 Richard Renaldi was born in 1968 in Chicago, IL, and received his BFA in photography from New York University. Exhibitions of his photographs have been mounted in galleries and museums throughout the United States and Europe, including the House of Photography in Stockholm; The Robert Morat Gallery in Hamburg; and The Aperture Gallery; Bonni Benrubi Gallery; and Yossi Milo Gallery in New York. Renaldi’s work has also been exhibited in numerous group shows, including Strangers: The First ICP (International Center of Photography) Triennial of Photography and Video (2003). In 2006 Renaldi’s first monograph,Figure and Ground, was published by Aperture. His second monograph,Fall River Boys, was released in 2009. Renaldi's most recent monograph,Touching Strangers, was published by the Aperture Foundation in the Spring of 2014.