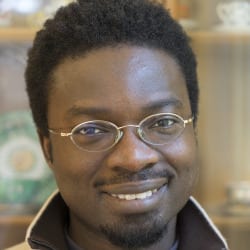 Richmond Sarpong is a Professor of Chemistry at the University of California Berkeley where he and his group specialize in synthetic organic chemistry. Richmond became interested in chemistry after seeing, firsthand, the effectiveness of the drug ivermectin in combating river blindness during his childhood in Ghana, West Africa. Richmond describes his influences and inspirations in a TEDxBerkeley talk in 2015. Richmond completed his undergraduate studies at Macalester College in St. Paul, MN and his graduate work was carried out with 1978 Guggenheim Fellow Prof. Martin Semmelhack at Princeton. He conducted postdoctoral studies at Caltech with Prof. Brian Stoltz where he teamed up on a project with 2016 Guggenheim Fellow Prof. Neil Garg.

At Berkeley, Richmond’s laboratory focuses on the synthesis of bioactive complex organic molecules, especially secondary metabolites (aka natural products) that come from marine or terrestrial flora and fauna. Natural products continue to serve as the inspiration for new medicines. It is Richmond’s hope that through the work in his laboratory, he and his coworkers will uncover novel methods and strategies for synthesis that may contribute to more efficient ways to prepare new medicines.

Of all his professional accomplishments, Richmond is most proud of the achievements of the students that have worked in his research group. He was the recipient of the 2009 UC Berkeley Department of Chemistry teaching award and the 2016 Noyce Prize for Excellence in Undergraduate Teaching in the Physical Sciences at Berkeley. Richmond’s research group has published over 75 papers, and he has received numerous awards in recognition of his research including an Alfred P. Sloan Foundation Fellowship, a Japan Society for the Promotion of Science Fellowship, a Camille Dreyfus Teacher-Scholar Award, an ACS Cope Scholar Award, an NSF Career Award, and a Royal Society of Chemistry Synthetic Organic Chemistry Award. He is grateful for a 2017 Guggenheim Fellowship, which will allow him to pursue a new line of research on novel ways to prepare bioactive molecules using sustainably sourced starting materials.