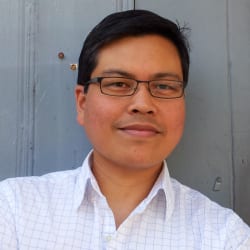 Rick Barot has published three books of poetry with Sarabande Books: The Darker Fall (2002), Want (2008), which was a finalist for the Lambda Literary Award and won the 2009 Grub Street Book Prize, and Chord (2015), which was a finalist for the LA Times Book Prize and the PEN Open Book Award, and the winner of the 2016 UNT Rilke Prize. His poems and essays have appeared in numerous publications, including Poetry, The Paris Review, The New Republic, The New York Times Magazine, Tin House, The Kenyon Review, and Virginia Quarterly Review. He has received fellowships from the National Endowment for the Arts, the Artist Trust of Washington, the Civitella Ranieri, and Stanford University, where he was a Wallace E. Stegner Fellow and a Jones Lecturer. He lives in Tacoma, Washington and directs The Rainier Writing Workshop, the low-residency MFA program in creative writing at Pacific Lutheran University. He is also the poetry editor for New England Review.