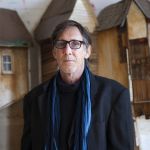 Hite was born in 1956 and spent childhood just outside of Bowling Green, a small town in rural Virginia.  During his formative youth, Hite traveled in the Caribbean, Europe, Asia, and South America.  He spent a stint as a studio assistant for the Washington Color School painter Leon Berkowitz, and enjoyed success in the eighties and early nineties as an abstract landscape artist in Washington, D.C. Hite has shown his work widely, most notably in a solo show at he Nassau County Museum entitled Imagined Histories, which ran from May through September 2011. Though his work deals in abstraction, images of structures, dwellings, and living spaces have become central to his pieces.  Hite now works in photography, painting, and sculpture, although they often intersect through common imagery and sentiment.  In 1997, Hite and his family moved to Esopus, New York, a small town in the Hudson Valley where he converted a 1840s Methodist church into his home and studio.  There he has created a productive artistic space for himself, and sometimes others. Critics have been very appreciative of his work. In his foreword to Imagined Histories/Living on Earth, Nassau County Museum Director Karl Emil Willers pointed out that in Hite's art "there is always something of value and meaning emerging from the derivative…. That which appears at the interstices—amidst styles and between media—becomes paramount and all-important. The look being courted is outside the central current, at the edges of the mainstream." Paul Smart, writing in the Hudson Valley Times, described him as “an elegant man who has allowed his artwork to mature on its own, pushed only by his lifelong allegiance to the idealism of true human rights and increased equality among all peoples, Hite speaks of what he does in terms of what it can do.” And in his review for Green Door Magazine, Gregory Schoenfeld was equally impressed: “Hite’s artwork mirrors the belief that the best adversary for complacency is verity. Truth-telling through art is an ongoing battle, and Hite meets the challenge with an earnestness that is both intensely personal and universal.” Profile photograph by Katie Lobel Follow this link to see a video, Robert R. Hite. Imagined Histories at the Nassau County Museum Obituary