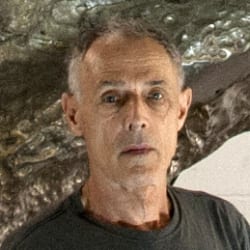 Robert Lobe has been hammering metal around rocks and trees in the woods for over 40 years, developing a tactile realism of his own invention deftly turning process into form. The focus of Lobe's work is the passage of time and regeneration of nature, forces of nature, how they're manifested visually, and random distribution. His compositions are imbued with meaning deeper than the sum of their parts, dealing with the issues of composition and structure in art as well as those of representation. They also bring to mind the ideas of the Transcendentalists and other early American philosophical constructs as well as our never-ending national dialogue with and very real dependency on nature.

Robert Lobe is an American sculptor born Detroit, Michigan in 1945. Lobe grew up in Cleveland, Ohio and attended Oberlin College and Hunter College. Lobe’s early works were included in the “Anti-Illusion: Procedures and Materials” exhibition at the Whitney Museum in 1969. His hammered metal sculptures, mostly in aluminum, have been represented by Zabriskie, Willard, Blum Helman and Senior and Shopmaker galleries in New York. A survey of large wall reliefs was featured at Grounds for Sculpture in 2015, and an exhibition of 5 outdoor works were shown in the forest around the Mohonk Preserve Visitors Center the same year. Currently, Lobe’s work is included in "New York Silver, Then and Now," until June 2018 at The Museum of the City of New York and an exhibition of new work at the West Broadway Gallery until May 13, 2018. His new sculpture, SUPERSTORM, is about Climate Change.