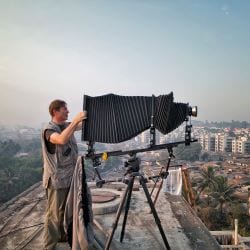 Since the late 1970', Robert Polidori has collected photographic materials from many parts of the world that illustrate his central themes concerning temporality and habitat. It is Robert' belief that: "Rooms are both metaphors and catalysts for states of being - all the while describing much about the character and life thrust of their inhabitants. It' hard to tell what changes more slowly, rooms or the pictures of rooms, which often result in refreshing our memories of what we thought we saw.” He has published 12 monographs with Gerhard Steidl, including “After the Flood,” photographs taken in New Orleans following Hurricane Katrina, from which a selection of works were exhibited at the Metropolitan Museum of Art in New York in 2006. Photo Credit: Dinesh Madhavan