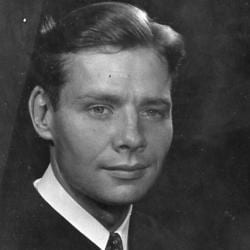 SHAW, ROBERT.  Appointed for the study of musical theory and the techniques of instrumental and choral conducting, and the preparation of a book on the development of symphonic choruses for the performance of modern choral music; tenure, twelve months from the Autumn of 1944 (postponed).

Principal performances by the Collegiate Chorale: at American Composer’s Alliance Festival, with the National Orchestral Association, and with the NBC Symphony Orchestra, 1942; at the Town Hall Music Forum, at the American Musical Festival, at the Gabrilowitsch Memorial Series, in St. Matthew’s Passion at the Metropolitan Opera House, in the Fifth Serenade Concert at the Museum of Modern Art, and with the Philharmonic-Symphony Orchestra and Paul Robeson at Lewisohn Stadium, 1943; with CBS Orchestra and Sir Thomas Beecham, 1943–44; Town Hall Endowment Series, and concert of Modern English Choral Music, 1944.