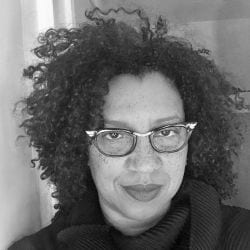 Robin Coste Lewis is the poet laureate of Los Angeles. In 2015, her debut poetry collection, Voyage of the Sable Venus (Knopf) won the National Book Award in poetry––the first time a poetry debut by an African-American had ever won the prize in the National Book Foundation’s history, and the first time any debut had won the award since 1974. Critics called the collection “A masterpiece…” “Surpassing imagination, maturity, and aesthetic dazzle…” “remarkable hopefulness…in the face of what would make most rage and/or collapse…” “formally polished, emotionally raw, and wholly exquisite.” Voyage of the Sable Venus was also a finalist for the LA Times Book Prize, the Hurston-Wright Award, and the California Book Award. The Paris Review, The New Yorker, The New York Times, Buzz Feed, and Entropy Magazine all named Voyage one of the best poetry collections of the year. Flavorwire named the collection one of the 10 must-read books about art. And Literary Hub named Voyage one of the “Most Important Books of the Last Twenty Years.”

Lewis’s writing has appeared in various journals and anthologies, such as Time Magazine, The New Yorker, The New York Times, The Paris Review, Transition, and Best American Poetry. In 2018, MoMA commissioned both Lewis and Kevin Young to write a series of poems to accompany Robert Rauschenberg’s drawings in Thirty-Four Illustrations of Dante’s Inferno (MoMA, 2018). Lewis is currently at work on two new collections, To the Realization of Perfect Helplessness and Prosthetic, both of which are forthcoming from Knopf.

Lewis received her BA from Hampshire College in creative writing and comparative literature; an MTS degree in Sanskrit and comparative religious literature from the Divinity School at Harvard University; an MFA in poetry at New York University; and a PhD from the University of Southern Creative Writing and Literature Program, where she was a Provost’s Fellow in poetry and visual studies. Lewis’s current research focuses on the intersecting production histories of early African American poetry and photography, for which she also received the Anne Friedberg Memorial Grant from USC’s Visual Studies Research Institute.

Other fellowships and awards include those from the Cave Canem Foundation, the Los Angeles Institute of the Humanities, the Caldera Foundation, the Ragdale Foundation, the Headlands Center for the Arts, and the Summer Literary Seminars in Kenya. Lewis was a finalist for the International War Poetry Prize, and the National Rita Dove Prize. Lewis also received a Woman-of-the-Year award from Los Angeles County, and in 2018, Lewis was named an “Art-of-Change” fellow by the Ford Foundation.

In addition to writing essays and poetry, Lewis creates text/art installations and regularly collaborates/contributes on projects with visual artists and filmmakers. Lewis has taught on the faculty of Wheaton College, Hunter College, and Hampshire College. Currently, she teaches in NYU’s low-residency MFA in Paris, and is a writer-in-residence at USC.

Born in Compton, California, her family is from New Orleans.