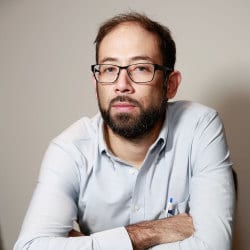 Rodrigo Reyes is an award-winning, Mexican-American filmmaker whose work has screened in nearly 50 film festivals around the world, including the LA Film Festival, BFI London and Guadalajara International Film Festivals, as well as the Documentary Fortnight at The Museum of Modern Art in New York, garnering rave reviews in the New York Times, Variety and other media outlets. His film PURGATORIO won several awards, including the Jury Prize for Best Documentary at the New Orleans Film Festival, while his hybrid-narrative LUPE UNDER the SUN won a Special Jury Award at the Los Angeles Film Festival. Named one of the 25 New Faces of Independent Film by Filmmaker Magazine, he is a National Endowment for the Arts Fellow at the MacDowell Colony and was selected for the National Mediamaker Fellowship by the Bay Area Video Coalition. His work has received the support of Tribeca Film Institute, Sundance Institute, California Humanities Council Film Independent, Pacific Pioneer Fund, NALIP, both the IFP Narrative and Documentary Labs, as well as the Mexican Film Institute (IMCINE).

Exploring the stories that exist in the overlapping spaces between juxtaposed cultures and systems, Rodrigo's keen eye humanizes complex social issues and challenges our understanding of the forces driving our world and their effects on the individuals who have been pushed to its margins. He will use his Guggenheim Fellowship to work on an untitled film project.

The Atlantic: A Visceral Portrait of Life at the US Mexico Border
BBC Outlook: The Secret Lives of Mexican Farmers