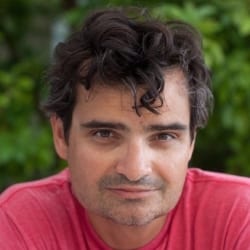 Rogelio Martinez is an award-winning playwright whose plays have been workshopped and produced in theaters across the country and abroad. He is a recipient of the Princess Grace Award and has also received the Mid-Career Fellowship at the Lark Theater Company. In addition, Rogelio is a recipient of a New York Foundation for the Arts Grant, an NEA/ TCG grant, and has received a James Hammerstein Award.

Martinez is a child of the Cold War and his feelings about the time remain raw. Directly affected by this period in history, his focus in recent years has been on telling its story. After being awarded an Alfred P. Sloan Foundation New Science and Technology Initiative Grant by the Denver Center, Martinez went on to write When Tang Met Laika, a post Cold War space exploration play; which was subsequently produced by the Denver Center. This inspired Martinez to bring the Cold War to life on stage and write a three play cycle exploring the time period. The first play in this Cold War trilogy is Ping Pong. The play is about U.S.-Chinese relations during the Nixon administration. It was presented at the Public Theatre. Born in East Berlin, the second play, tackled the impact a Springsteen concert had on East Germans just prior to the fall of the Berlin Wall. The play was recently workshopped at the Atlantic Theater Company and has since been translated into both Hungarian and Romanian. Martinez’s trilogy concludes with Blind Date. The Denver Center, under the artistic leadership of Kent Thompson, commissioned Blind Date. The play tracks the series of events leading up to the Geneva Summit where President Reagan and General Secretary Gorbachev first shook hands. Blind Date was featured at the 2017 Colorado New Play summit.

Martinez has been commissioned and his plays have been workshopped by numerous theaters across the country including the Public Theater, Oregon Shakespeare Festival, Mark Taper Forum, South Coast Repertory, Atlantic Theater Company, Arden Theater, Asolo Repertory, and Ojai Theater Company. For several years Martinez was a member of the Dorothy Strelsin New American Writer’s Group at Primary Stages. Martinez is an alumnus of New Dramatists.

Over the last twenty years, Rogelio has worked with and mentored writers of all ages. He has taught at various institutions including Columbia University, City College of New York, Montclair State University, Rutgers University, and Goddard College. In the summer of 2016, Martinez travelled to Portugal where he taught a two week writing workshop. Additionally, Martinez has translated the work of both Mexican and Cuban playwrights. As well, Martinez has traveled to Albany to speak to New York State State Legislature to advocate for the arts and education.

Rogelio was born in Sancti-Spiritus, Cuba and arrived in the United States on the Mariel boatlift in 1980. As a Guggenheim Fellow, Martinez plans to return to Cuba for the first time since 1980 to research his newest play.