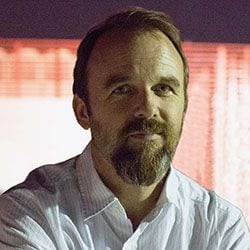 Ron Jude, born in Los Angeles in 1965 and raised in rural Idaho, lives and works in Eugene, Oregon, where he is a professor of art at the University of Oregon. For the past twelve years, his work has consistently explored the nexus between place, memory and narrative through multiple forms and approaches, ranging from appropriated imagery to photographs that echo traditional documentary strategies.

In his newest work, Jude is preoccupied with imperceptible forces, from plate tectonics to the ocean tides, from cycles of growth and decay in the forest, to the incomprehensibility of geological spans of time. His latest photographs allude to the ungraspable scale and veiled mechanics of these phenomena, while acknowledging a desire to gain a broader perspective, beyond the human enterprise, in a time of ecological and political crisis.