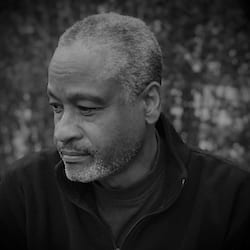 Ron Tarver received a BA in Journalism and Graphic Arts from Northeastern State University and an MFA from the University of Arts. He serves as Associate Professor of Art at Swarthmore College. Before Swarthmore, Tarver was a photojournalist at the Philadelphia Inquirer for 32 years, where he shares a 2012 Pulitzer Prize and numerous international, national, and state awards. He is co-author of the book We Were There: Voices of African American Veterans, published by Harper Collins, which was accompanied by an exhibition that debuted at the National Constitution Center in Philadelphia.

In addition to his career in photojournalism, Tarver has distinguished himself in the field of fine art photography. He is a recipient of Pew Fellowship in the Arts, and has received grants from National Geographic, the Pennsylvania Council on the Arts, and two Independence Foundation Fellowships.

His work is including the Philadelphia Museum of Art, the State Museum of Pennsylvania in Harrisburg, Oklahoma Museum of History, Studio Museum in Harlem, and the National Museum of American Art of the Smithsonian Institution in Washington DC. You can find him on Instagram at @rontarver.