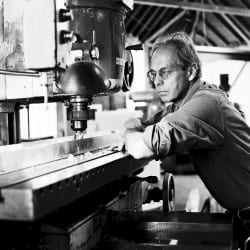 In his four-decade career as a painter Roy Thurston has eschewed traditional painting theory. Working with only the most basic elements – initially paint and a panel - Thurston has explored painting as a transmission of visual experiences. Thurston’s paintings eliminate metaphor, narrative, overt theory and, to a certain degree, composition. They champion the life force discoverable to the viewer via materials utilized, the artist’s process and specifics of time and place.

Though born in New York and raised in Maine, Thurston headed west to Colorado College for his undergraduate studies. Upon graduation (BA 1971) Thurston made his way to the Claremont Graduate School (MFA 1974) where he trained with noted acoustic artist Michael Brewster. By 1975 Thurston had moved slightly west from Claremont to Venice, California and set up his own studio. During this time, while maintaining his own art practice and exhibiting, he worked first as an assistant to painter Guy Williams and then to sculptor James Turrell. Thurston was instrumental in the construction of Turrell’s installations at the Whitney Museum and P.S. 1 in the early 1980s. In 1985 Thurston supervised the construction of Turrell’s installation at MOCA (35,000 square feet of an architectural design.) Through the years he has continued to provide physical support for a number of museums and galleries.

Over the years, Thurston’s initial materials (paper and wood panels) have given way to aluminum and even copper. Transparent paint laced with specifically calibrated amounts of pigment has transformed the light reflecting possibilities of the base metals. The artist has also evolved techniques and machinery for altering the surface of the painting by means of scraping or cutting. In the last fifteen years, with the implementation of these innovations, Thurston’s paintings offer the suggestion of a form inside the embodiment of color. Current work has substituted new materials on top of metal significantly altering the qualities described above.

Thurston continues to live and work in Los Angeles.