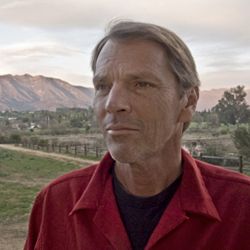 Russell Crotty's vast body of work challenges the limitations and preconceptions of drawing as primary medium, pushing the genre towards minimal sculptural installation. His practice chronicles an idiosyncratic commentary on astronomy, landscape, coastal mapping, and the natural and manmade world. Especially known for drawings on paper-coated suspended globes and within large-scale books, he continues to explore new ideas that investigate and expand the notion of “works on paper.” As a serious amateur astronomer, Crotty has studied the night sky for decades, utilizing his own telescopes along with sojourns to professional observatories, and has made observational contributions to astronomy organizations such as NASA and ALPO. His obsessive documentation of celestial phenomenon has resulted in a body of astronomical work informed by actual scientific research, yet infused with his own interpretations. His personal and artistic pursuits also involve a deep love of the ocean and the coastline, resulting in an extensive oeuvre of landscape and seascape drawings, globes and books.

Born in 1956 in San Rafael, CA, Crotty was greatly influenced by his parents, both artists in the early days of Bay Area modernism. He received a BFA from San Francisco Art Institute in 1978 and an MFA from University of California Irvine in 1980, then moved to Los Angeles after completing his studies. Around 2000, with the excitement of Y2K and a fervor for all things “cosmos,” he began to gain recognition, especially for his astronomy-based work. He has been a Visiting Artist at California Institute of the Arts and at UCLA, and has given numerous lectures at museums, colleges and universities nationwide. He now lives in Ojai and works in Ventura, California.

His work can be found in numerous books and publications, along with many important public collections including – the Museum of Modern Art (NY); Whitney Museum of American Art (NY); Centre Pompidou (Paris); Museum of Contemporary Art (LA); Los Angeles County Museum of Art; San Francisco Museum of Modern Art; Museum of Contemporary Art Miami; High Museum of Art (Atlanta); and the ART in Embassies Program, U.S. Dept. of State (American Embassy in Beijing, China). Archival materials of the artist's career can be found at the Bibliothèque Kandinsky, Centre Georges Pompidou in Paris, and at the Center for Art + Environment at Nevada Museum of Art in Reno, Nevada.

Other awards and fellowships include – a 2015 Artist-in-Residency with the Institute of the Arts and Sciences (IAS) at UC Santa Cruz together with the Lick Observatory and other campus partners , culminating in a 2016 solo exhibition at the Institute of Contemporary Arts, San Jose, CA; a 2008 Artists' Fellowship at The Ballinglen Arts Foundation, Ballycastle, Ireland; a 1999 Visual Arts Fellowship from the Peter Reed Foundation, New York, NY; and a 1991 Visual Arts Fellowship from the National Endowment for the Arts.