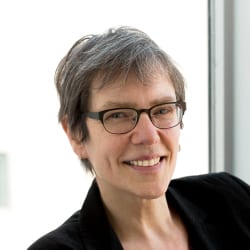 Sally Haslanger is Ford Professor of Philosophy and Women's and Gender Studies at MIT.  She has published in metaphysics, epistemology, feminist theory, and critical race theory.  Broadly speaking, her work links issues of social justice with contemporary work in epistemology, metaphysics, philosophy of language, and philosophy of mind. A collection of her papers that represent this effort over twenty years was collected in Resisting Reality: Social Construction and Social Critique (Oxford 2012), and it received the Joseph B. Gittler award for outstanding work in philosophy of the social sciences. She has co-edited three books that further reflect the breadth of her interests: with Elizabeth Hackett, Theorizing Feminisms: A Reader (Oxford 2005); with Charlotte Witt, Adoption Matters: Philosophical and Feminist Essays (Cornell 2005); with Roxanne Marie Kurtz, Persistence: Contemporary Readings (MIT Press 2006).

Recently Haslanger has been working on social practices, social structure, structural explanation with an emphasis on the materiality of social practices and the role of ideology.  In 2015, she was the Spinoza Professor at the University of Amsterdam and her lectures have appeared as a booklet: Critical Theory and Practice (Koninklijke Van Gorcum, 2017). She has been honored to give lectures across the United States and internationally, including the Carus Lectures at the American Philosophical Association, the Kant Lectures at Stanford, the Seybert Lectures at the University of Pennsylvania. In 2017, she gave the Gaos Lectures at the Universidad Nacional Autonóma de México (UNAM) and the UNESCO Lectures on Gender Equity at the Pontifica Universidad Católica de Perú, in Lima. In 2016, she was the Miegunyah Professor at the University of Melbourne and gave the Smart Lecture at the Australian National University.

In addition to her research on equity, Haslanger is deeply committed to promoting diversity in philosophy and beyond. She was the founder and convener of the Women in Philosophy Task Force, and co-founded PIKSI-Boston, a summer philosophy institute for undergraduates from under-represented groups. She was awarded the Martin Luther King, Jr. Leadership Award at MIT in 2014, and the YWCA Cambridge Tribute to Outstanding Women in 2011. In 2013-4, she was the President of the Eastern Division of the American Philosophical Association, and in 2015, she was elected to the American Academy of Arts and Sciences.