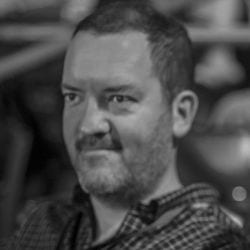 Sam Stephenson is a writer who grew up in coastal Washington, North Carolina and graduated from UNC-Chapel Hill in 1989.

For twenty years Stephenson followed footsteps of photographer W. Eugene Smith, conducting hundreds of oral history interviews in twenty-nine states and Japan, and working to make sense of Smith’s thousands of hours of audio recordings made in a Manhattan loft 1957-1965. He authored two books from this work: Dream Street: W. Eugene Smith’s Pittsburgh Project (Norton, 2001) and The Jazz Loft Project: The Photographs and Tapes of W. Eugene Smith from 821 Sixth Avenue 1957-1965 (Knopf, 2009).

The work culminated with Gene Smith’s Sink (Farrar, Straus and Giroux, 2017), an unorthodox spare biography about which the poet Ross Gay wrote, “Stephenson’s book is the result, and an artifact of, lyric research…and in this way it was has much to do with poetry as it does documentary or nonfiction.”

His writing has appeared in The Paris Review, Tin House, the Believer, the Oxford American, the New York Times, and others. He’s won two ASCAP Deems Taylor-Virgil Thomson prizes, an NEH Fellowship, and many institutional grants.

In 2013 Stephenson founded Rock Fish Stew Institute of Literature and Materials in Durham, N.C. and partnered with The Paris Review to produce Big, Bent Ears: A Serial of Documentary Uncertainty (2015), a thirteen part series,TPR’s first foray in mixed media on this scale.

In 2017 he gave the annual Hansen Lecture at the Lawrence de Graaf Center for Oral and Public History at California State-Fullerton.

As a Guggenheim fellow, Stephenson will research the “vibe and time” of the Los Angeles band Jane’s Addiction’s original years, against the backdrop of the culture at large 1985-1991 – Reagan-Bush, AIDS fears, Chernobyl, Berlin wall going down, early hard right footing of Gingrich and Limbaugh, buildup to Persian Gulf War and Bush’s 91% approval rating, and more.

Stephenson now lives in Bloomington, Indiana with his wife, an evolutionary biologist, and their four-year old son.