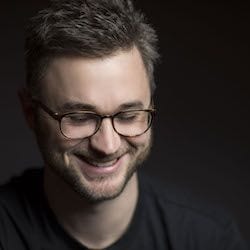 Samuel Adams (b. 1985, San Francisco, CA) is a composer of acoustic and electroacoustic music. His work has been hailed as “mesmerizing” and “music of a composer with a personal voice and keen imagination” by The New York Times, “canny and assured” by The Chicago Tribune and “wondrously alluring” by The San Francisco Chronicle.

Adams grew up in the San Francisco Bay Area, where he performed double bass and studied composition and electroacoustics at Stanford University; he later studied with Martin Bresnick. His music draws on his experiences in a diverse array of disciplines including classical forms, microsound, noise, improvised music, and field recording.

Adams served as the curator for the Chicago Symphony Orchestra’s MusicNOW series from 2015-2018, a period that saw the commissioning of nine new works, including Amy Beth Kirsten’s SAVIOR and a new work by Manual Cinema, as well as the development of an audiovisual collaboration with the Art Institute of Chicago. He has also curated for the San Francisco Symphony as part of their experimental SoundBox series.