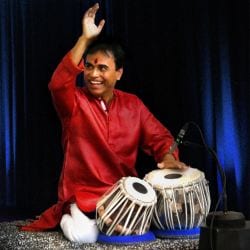 “When [Sandeep] plays the Tabla, he is a creator of myths, a master communicator and an orchestra, all in one. In my decades of collaboration around the world, he is easily one of the greatest artists I have ever met.”
Yo-Yo Ma

Sandeep Das is an internationally-celebrated Tabla virtuoso and composer with a career spanning more than 28 years. His performances and compositions are rooted in tradition and nimble in innovation. Since his debut concert at the age of 17 with the Sitar maestro Pt. Ravi Shankar, he has performed with many of the legends of Indian classical music and collaborated with many iconic artists of other traditions such as Yo-Yo Ma, Paquito D’Rivera and countless others. He has also played with string quartets and orchestras including The New York Philharmonic, The Chicago Symphony Orchestra, and The Boston Symphony Orchestra to name a few.

Das’ concerts have taken him regularly to major centers of music around the globe, including Carnegie Hall, Lincoln Center, Royce Hall, The Royal Albert Hall, Hollywood Bowl, the Kennedy Center and the Concertgebouw. He has played at coveted events such as the 150th anniversary of the UNO at the General Assembly Hall (NYC), the opening ceremony of the Special Olympics in Shanghai (China), the opening ceremony of the first Asia Expo in Kunming (China), the World Economic Forum (China). He has also performed for visiting dignitaries like the Queen of England, the Queen of Thailand, the Pope, and various other world leaders.

His collaboration with Yo-Yo Ma and the Silk Road Ensemble (SRE) for “Sing Me Home” won the 2017 Grammy Award for the Best World Music Album, and he has had two previous Grammy nominations in 2005 and 2009. He was also awarded with the prestigious Brother Thomas Fellowship (2017) and the Live Arts Boston Grant (2018) from The Boston Foundation.

Commissioned to write several pieces that have received critical acclaim, his compositions feature both Indian and world instruments in a unique combination of percussion and melody that has dazzled audiences all over the world. His innovative style draws on his intense training in Indian classical music and music genres he has encountered across the globe resulting in unique and eclectic compositions that display his mastery over the vast and complex Indian classical music and grasp of world music.

Inspired by Yo-Yo Ma’s vision of engaging “music, radical cultural collaboration, and passion-driven learning for a more hopeful world,” Das sought to carry it forward through his own humanitarian efforts and musical work, and in 2009 founded HUM. Meaning literally “we” in the Hindi language, the acronym stands for (H)armony and (U)niversality through (M)usic. It promotes cross-cultural music exchange and provides financial assistance to specially-abled children with an aptitude for the arts. Since its inception, HUM has grown in size and now supports several specially-abled children through a National Scholarship, the first of its kind in India.

The HUM Ensemble is the musical wing of HUM that engages and collaborates with international artists of western and eastern traditions. The Ensemble has been extensively performing at premier venues in India, Europe and the USA and is currently touring its new project Delhi to Damascus: Transcending Borders One Note at a Time. It is a collaboration between Syrian and Indian Classical music inspired by the ideals of inclusion, compassion and humanitarianism. It features new compositions and arrangements drawing from explorations of traditional Indian Ragas like Bhairavi, melodic Arabic Maqams, philosophical Sufi poems, lyrical Thumri, classical cross-rhythm cycles, and pulsating folk grooves. An album with the same title is up for release this year.

Das’ journey into the world of music began at the age of 7 in the centuries-old Indian tradition of Guru-Shishya Parampara (student-disciple tradition) by living with his legendary Guru—Pandit Kishan Maharaj— for 12 years and learning and practicing music as a way of life, rather than an isolated art form. His intense training followed the oral tradition of learning music, where knowledge was imparted orally rather than by notation or written text.

An internationally sought-after educator, teacher and speaker, Das has given Key-note speeches at well-known conferences (eg Conference in CA in 2016 and the World Culture Summit in Abu Dhabi in 2017) and countless lectures at universities and conservatories on topics ranging from “Passion Driven Learning” to “The Art of Communication,” “Indian Music and Dance” and “The Rhythms of Life.”

Das’ training and life experiences provide a unique platform and educational opportunity for students and ensembles to learn from. He has taught masterclasses at schools and universities throughout the world including Juilliard School of Music, Berklee School of Music, UC British Columbia, and Luneneberg Academy of Music. In the recent past, he served as a faculty member and a teaching artist for four years at the Harvard Education School Summer Institute and at Silkroad’s Global Musician Workshop. Additionally, he has been an artist-in-residence at universities such as Dartmouth, Brandeis, UC Santa Barbara, UC Santa Clara, and College of the Holy Cross.

A Gold Medalist in English Literature from Banaras Hindu University in India, Das is a performer, composer, cultural entrepreneur, and an educator who believes that humanity is his community and strives to use his music as a tool to serve it. He currently resides in Boston, USA.