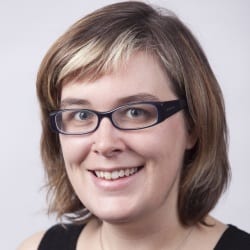 Sara Skrabalak is the James H. Rudy Associate Professor of Chemistry at Indiana University – Bloomington. Prior to joining the faculty at Indiana, Sara received her B.A. in chemistry from Washington University in St. Louis in 2002 where she conducted research with William E. Buhro. She then earned her Ph.D. in chemistry from the University of Illinois at Urbana – Champaign, IL under the direction of Professor Kenneth S. Suslick. During that time, she was the recipient of the T.S. Piper Thesis Research Award. Subsequently, she conducted postdoctoral research at the University of Washington – Seattle with Professors Younan Xia and Xingde Li before joining the faculty at Indiana University in 2008. She was promoted to Associate Professor in 2014 and named a Rudy Professor by the University’s Provost in 2015.

The Skrabalak group develops new synthetic methods to nanoscale materials, where their size, shape, and architecture are precisely controlled. They also study how the local and nanoscale structure of inorganic materials imparts functionality, with an interest in designing materials for applications in catalysis, solar energy conversion, chemical sensing, and security.

Sara enjoys communicating science to diverse audiences. Activities include teaching chemistry for non-science majors, speaking about her experiences as a women in science, lecturing at universities across the world, including in New Zealand through the American Chemical Society’s (ACS) GREET Program and at the Joint US-Africa Materials Institute in Arusha, Tanzania, and overseeing Science Ambassadors. The latter is a program in which undergraduate researchers return to their former high schools to introduce nanoscience and serve as mentors to students interested in STEM.

Sara has co-authored more than 70 research papers and given more than 100 presentations national and internationally. Besides the Guggenheim fellowship, she received an NSF CAREER Award in 2010; Cottrell Scholar Award, 2012; Alfred P. Sloan Foundation Research Fellow, 2013; the Early Career Award (DOE) 2013; ACS Pure Chemistry Award, 2013; Camille Dreyfus Teacher-Scholar Award 2014; the 2015 Leo Hendrik Baekeland Award, the Magomedov-Shcherbinina Memorial Prize, 2016; and finally, a Fulbright Fellowship (Spain), 2017. Sara has served as the Nanoscience Chair for the Division of Inorganic Chemistry at the ACS and is an editorial board member for the journals Chemistry of Materials, ChemNanoMat, and Nanoscale.