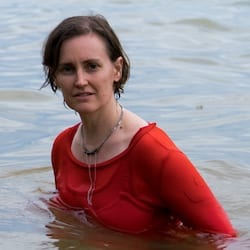 New York-based artist Sarah Cameron Sunde works at the intersection of performance, video, and public art, investigating scale and duration in relationship to the human body, the environment, and deep time. Sunde’s series of nine site-specific performances and video artworks, 36.5 / A Durational Performance with the Sea (2013 – present), has been created with communities around the world including the Netherlands, Bangladesh, Brazil, and Kenya. 36.5 was recently the subject of a major section in Resilience: A Journal of the Environmental Humanities. As a Guggenheim Fellow, Sunde will complete the series in Aotearoa-New Zealand and NYC.

Sunde’s current interdisciplinary practice is informed by 18 years of making theater as a devisor, director, translator, and producer. In 2017, she instigated and co-founded Works on Water, an artist-driven experimental organization dedicated to making art on/in/with bodies of water. Sunde’s video artworks have been projected and exhibited hyper-locally on buildings in Harlem, on 14th century fort walls in Mombasa, and in solo shows at Gallatin Galleries, NYC, Georgia Museum of Art, GA; and Oude Kerk, Amsterdam. Sunde has been an Artist-in-Residence with Baryshnikov Art Center, LMCC Workspace, and Watermill Center, and is recipient of a MAP Fund Grant and a Princess Grace Award.