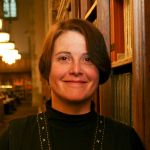 Sarah Ruden studied at the University of Michigan, Harvard, and the Johns Hopkins Writing Seminars. She has taught classics and creative writing at the University of Cape Town, South Africa. Her scholarship has concentrated on literary translation of the Greek and Roman classics: she has published translations of the Satyricon of Petronius (Hackett, 2000), Aristophanes’ Lysistrata (Hackett, 2003), the Homeric Hymns (Hackett, 2005), and Vergil’s Aeneid (Yale UP, 2008). She has been particularly concerned with making ancient literature clear, appealing, and informative for readers who have little or no background in ancient languages.

Her publications also include poems, essays, investigative journalism, and now Paul among the People: The Apostle Reinterpreted and Reimagined in His Own Time (Random House, 2010). In 1996, she won South Africa’s then leading book prize, the Central News Agency Literary Award, for her collection of poems, Other Places (William Waterman Publications, Johannesburg, 1995).

Her Guggenheim fellowship will fund her translation of the Oresteia of Aeschylus. These three important plays about blood guilt, primordial tradition, and the rule of law in a nation-state have difficult and obscure yet extraordinarily beautiful diction. Sarah Ruden will be studying the original Greek text minutely and applying her experience in modern lyric forms to produce translations that, while they cannot be literal, can aim to be analogous.

She has been a Quaker since 1992 and a visiting fellow at Yale Divinity School since 2007. She will spend the year of her fellowship as a visitor at Wesleyan University.

The new Norton Anthology of World Literature (Third Edition) will contain Sarah Ruden's entire Lysistrata translation. Follow this link to view the webpage for this volume.