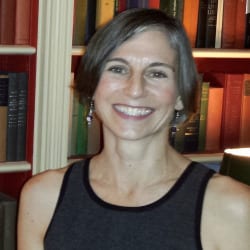 Sarah Wagner is an Associate Professor of Anthropology at George Washington University. Her research has explored the connections between the destructive and creative forces of war. Through it, she has sought to understand how war fosters and often requires innovation, from its perpetrators and its victims alike, both as violence unfolds and after arms are laid to rest. Much of her work centers on the phenomena of missing persons and the forensic efforts to recover them, subjects that have urged an interdisciplinary approach to studying the scientific, social, and political processes of post-conflict repair.

Wagner is the author of To Know Where He Lies: DNA Technology and the Search for Srebrenica’s Missing (University of California Press, 2008) and co-author with Lara J. Nettelfield of Srebrenica in the Aftermath of Genocide (Cambridge University Press, 2014), which received Honorable Mention for the International Studies Association’s Ethnicity, Migration and Nationalism Distinguished Book Award (2015) and was shortlisted for the 2015 Rothschild Prize of the Association for the Study of Nationalities. She has received grants from the National Science Foundation, the National Institutes of Health, the National Endowment of Humanities, IREX, and the Wenner-Gren Foundation, and has published widely in journals and edited volumes in anthropology, forensic sciences, and science and technology studies. Her writing has also appeared in popular outlets, including the Washington Post, Baltimore Sun, Los Angeles Times, and St. Louis Dispatch.

The Guggenheim fellowship will support Wagner’s third book, tentatively entitled Bringing Them Home: The Identification and Commemoration of Vietnam War MIAs. A study of war, memory, science, and innovation, the book is the culmination of several years of ethnographic and archival research that Wagner has conducted on the efforts to account for and memorialize U.S. service members Missing In Action (MIA) and presumed dead from the past century’s major conflicts. It focuses on American MIAs of the Vietnam War—some 1,600 still unaccounted for—attending to the fractious politics that have shaped how the war is recalled and its fallen remembered, and the forensic scientific advances that entwine the living with the dead in the project of national belonging.

Wagner earned an AB at Dartmouth College, Master of Law and Diplomacy at the Fletcher School (Tufts University), and PhD at Harvard University. Prior to joining George Washington University, she taught for five years at the University of North Carolina at Greensboro.