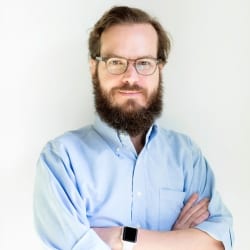 Scott Johnson is a historian of Late Antiquity. He studies the literary and linguistic cultures of the eastern Mediterranean from AD 200 to 800. The primary languages of his research are Syriac, Greek, and Coptic.

Johnson is Associate Professor of Classics and Letters at the University of Oklahoma. He studied Classics at Vanderbilt and received his D.Phil. in Classics from Oxford. He was a Junior Fellow in the Harvard Society of Fellows and has held fellowships at Dumbarton Oaks and the Kluge Center at the Library of Congress.

Johnson’s first book The Life and Miracles of Thekla, A Literary Study explores hagiographical literature in Greek from the fifth century AD, placing it in the confluence of cultures between the classical and early Christian worlds. His second book Literary Territories: Cartographical Thinking in Late Antiquity is a study of how the late antique imagination fashioned new concepts of the physical and celestial realms and, in turn, shaped the literature of the period. He edited a major volume The Oxford Handbook of Late Antiquity, which has become a standard reference work that also pushes the field forward in new directions. In addition to these, he has produced translations from Greek and Syriac and has written numerous articles on late antique literary culture.

Johnson’s Guggenheim project is a cultural biography of the language of Syriac. This will be the first book of its kind in English. It attempts to trace the origins, flourishing, and legacy of Syriac as an actor between empires in the late ancient and early medieval worlds. Syriac, a dialect of Aramaic, was a vibrant language in the period, and authors in the language were prolific, writing poetry, historiography, hagiography, and scientific treatises, among other genres. The language extended in all directions from its home in northern Mesopotamia, and its eastward expansion was especially significant, reaching all the way to central China in the seventh century. Syriac’s expansion and role in shaping the cultures it came into contact with will be a focus of this study. The book is intended to be a guide to the history of Syriac, including its relevance in the modern Middle East and diasporas. It is designed to raise awareness across many disciplines of this beautiful language and its significant literary and cultural traditions. Johnson is also the co-founder and co-editor of a major Digital Humanities project, Syri.ac, which represents a comprehensive annotated bibliography of online resources for the study of Syriac. Both the book and the Digital Humanities project aim at bringing the history of Syriac to students and scholars all over the world. This is important not least because modern Syriac Christians have suffered the diminution of their intellectual, literary, and religious heritage through global conflict and displacement.