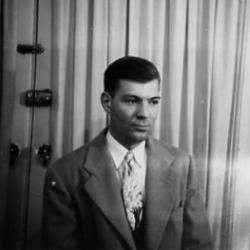 Sears Reynolds Jayne, Emeritus Professor of English and Comparative Literature at Brown University, died on 11 April 2015 in Cambridge, MA. He was 94 and succumbed to two strokes. He ended life in a hospital a mile from the Harvard Libraries where he had begun his undergraduate studies. After a year at Harvard as a freshman (1937-38), he went to the University of Missouri, Columbia, where he obtained a B.A. (1941) and M.A. (1942) in English.

The Second World War separated his graduate year studies. From 1943-46 he served in the U. S. Navy and, as navigating officer, was responsible for bringing his ship, the Isabel, safely home from Freemantle in Western Australia to San Francisco, using only a sextant and the stars as guide. When the ship passed under the Golden Gate Bridge, the ship’s company saw on a hillside printed in huge white letters: WELCOME HOME MATES; THANKS FOR A GOOD JOB.

From 1946 to 1948 he was at Yale, which awarded him a Ph.D. in 1948. He taught at the University of California, Berkeley (1948-56); the University of Virginia at Charlottesville (1956-59); Claremont Graduate School, where he was Arensberg Visiting Professor (1959-60); Pomona College (1959-62); Queens College, CUNY (1963-69); and Brown University (1969-81). He published numerous books, articles and reviews, spoke regularly at MLA and other scholarly meetings, and served on the editorial boards of Shakespeare Studies and other journals. He won a Guggenheim in 1954 and 1969, a Fulbright and ACLS fellowship, and spent research leaves in England and Italy, where he was a Harvard Fellow at Villa I Tatti in Florence in 1962-63.

His area of expertise was the English Renaissance. At the graduate level he taught courses in Shakespeare and English drama, in Spenser and Milton, in English poetry of the Tudor and Stuart periods, and in bibliography and method. His translation of Ficino’s Commentary on Plato’s Symposium (1944; 2nd ed. 1955), like his later John Colet and Marsilio Ficino (1963; reprinted 1980), argued for a better understanding of what Platonism meant in the Elizabethan period; in particular, he sought to show the anachronism of Neo-Platonism as a philosophical term. In his Plato in Renaissance England (1995) he reappraised Plato’s reputation in England. The completion of his monumental project, comprising Plato in Early Medieval England (2 volumes, 1991); Plato in Medieval England (2 volumes, 1994), and Plato in Tudor England (6 volumes, 1993, with a supplemental volume, 1999) had to await his retirement. It is deposited in the library at Harvard. Among other books are his bibliographical studies, the Library of John, Lord Lumley, which he co-edited with F. R. Johnson for the British Museum in 1956 and Library Catalogues of the English Renaissance, also in 1956.

He was a legendary teacher. At Berkeley he taught “Masterpieces in Literature” to a class numbering in the hundreds, and on occasion lectured on the Greek dramatists in the open-air Greek Theatre. That he had a magnificently stentorian voice and could declaim passages in Greek doubtless added to the effect of these lectures. Even as a full professor he chose to teach first-year students fundamentals of English composition.

He had to retire from teaching in 1981 because of his advancing deafness. But much as he regretted the loss of the classroom, he remained vigorously committed to the life of the mind. As well as his work on Plato he wrote a monograph on the Isabel, illustrated with maps, charts and photographs; this not only described the changing roles of the ship as a luxury yacht, a destroyer in World War I, and a patrol vessel in World War II, but examined the “myth” that the Isabel had been one of three ships used as decoys in late 1941 to provoke Japanese retaliation and thereby provide President Roosevelt with a casus bellorum. The work is on deposit in the U. S. Naval Academy Archives in Annapolis.

His greatest intellectual enjoyment came from the research he did with his wife Mae on Charles Sumner, the Abolitionist Senator from Massachusetts. The result is a magnum opus, a work of five volumes that treats Sumner in relation to Cartoons, Photographs, Sculpture, Prints, and Paintings. Charles Sumner and the Visual Arts (2011) is deposited in The Boston Athenaeum. It is a testament to his and Mae’s affection for the city that adopted them in their last decades.

Mae was the love of his life. She predeceased him in 2010. To his daughters—Lynn Fairfield of Amherst, Massachusetts, Emily Duckworth of Watertown, Massachusetts, and Elizabeth Parker of Antigonish, Nova Scotia—he was a devoted father. He had nine grandchildren and fourteen great-grandchildren. To all in his immediate and extended family he was fondly attentive and ever aware of their interests, achievements and concerns. He was a great conversationalist, correspondent, and mentor. He loved to recite Shakespeare so a quotation from Hamlet is appropriate: “He was a man, take him for all in all, we shall not look upon his like again.”

He wanted no memorial service of any kind, but a plaque to the couple will be placed on a bench near the Halcyon Pond in Mt. Auburn Cemetery.