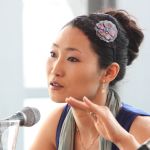 Praised as “OH, a name to remember” in the Volkskrant (September 2005), Seung-Ah Oh, a native of Korea, is the winner of the Toonzetters prijs for the best contemporary music in the Netherlands (2010),  the prestigious creative arts residency at the Bellagio Center by the Rockefeller Foundation (US. 2010),  the Barlow endowment for music composition, (US. 2008), the Goddard Lieberson Fellowship awarded by the American Academy of Arts and Letters (US. 2007),  the third prize of the Lutoslawski Award (Poland, 2007), and  both the first prize and the audience prize of the 3rd Seoul International Competition for Composers (Korea, 2005).

Her music has been described as “…exciting… in which you can experience a great variety of timbre and organic development," “refined… sharply cut” (Volkskrant, NL), and marked by "Asian sensitivity and meditation” (Cleveland Plain Dealer).

During her Guggenheim Fellowship, Ms. Oh will devote her time to several commissions, including a quintet for Brisk recorder quartet and percussion (NL); a trio for voice, piano, and percussion written for Tony Arnold, Thomas Rosenkranz, and Aiyun Huang; a quintet for electric-recorder, flute, trumpet, piano, and female voice inspired by the quarry photos by Edward Burtinsky, for the Hexnut ensemble (NL); a solo guitar piece for Dan Lippel (US), a solo piano piece for Thomas Rosenkransz, Nicholas Phillips (US), and Maarten van Veen (NL); a sextet for flute, violin, tenor sax, piano, percussion, and female voice for Wet Ink Ensemble (US); a trio for viola, clarinet, and percussion for Dinosaur Annex (US); a concerto for double string quintet and chamber orchestra for the CME at Oberlin (US);  a quintet for violin, oboe, electric guitar, horn, and percussion for ICE (US); and a trombone concerto for Berk Schneider and the National Symphony of Ecuador.

In October 2010, Seung-Ah Oh was invited to be one of the leaders of the international workshop Omnibus Laboratorium at Tashkent, Uzbekistan. The Omnibus ensemble is the only ensemble that brings New Music to central Asia, and its annual international meeting brings together young composers from Uzbekistan, Kazakhstan, Kyrgyzstan, Tajikistan, Azerbaijan, and Armenia. Ms. Oh gave public lectures on her music and a short talk on non-western sound and concept in contemporary music, and met young composers for private lessons.