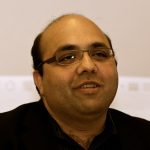 I was born in Pakistan, educated at Amherst College and Yale University, and currently teach in the department of Religious Studies at Stanford University. My research and publications to date have focused on the religious history of Persianate Islamic societies (Iran and Central and South Asia), with particular emphasis on the late medieval and early modern periods.

The Guggenheim fellowship will enable me to work on a book project in which I explore the ‘past’ as an aspect of the social imagination of Persianate Islamic societies during the period 1400-1600. I intend to approach the topic thematically, focusing on the following arenas: the simultaneous use of different calendars that indicates the availability of multiple pasts and futures for constructing identities in the present; the overwhelming significance of the principle of lineage through which the past is imagined as a series of interconnected bodies; the use of poetry to endow representation of the past with sentiment and transhistorical ideals; and what we can learn about literary subjectivity by paying attention to the use of first-person voice in narratives concerned with the past. I believe that reflecting on epistemological, sociohistorical, and aesthetic questions associated with these themes will lead to a cultural history useful for thinking about the relationship between memory, knowledge, and literature in Islamic contexts and beyond.

My previous publications include Sufi Bodies: Religion and Society in Medieval Islam (Columbia University Press, 2011), Fazlallah Astarabadi and the Hurufis (Oneworld Publications, 2005), and Messianic Hopes and Mystical Visions: The Nurbakhshiya Between Medieval and Modern Islam (University of South Carolina Press, 2003).