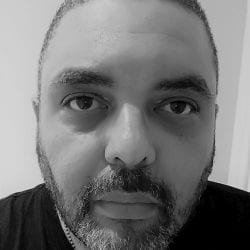 Shane McCrae has published six books of poetry: Mule (Cleveland State University Poetry Center, 2011), Blood (Noemi Press, 2013), Forgiveness Forgiveness (Factory Hollow Press, 2014), The Animal Too Big to Kill (Persea Books, 2015), In the Language of My Captor (Wesleyan University Press, 2017), which won the 2018 Anisfield-Wolf Book Award for Poetry, and was a finalist for the National Book Award, the Los Angeles Times Book Award, and the William Carlos Williams Award, and The Gilded Auction Block (Farrar, Straus and Giroux, 2019). He has received a Lannan Literary Award, a Whiting Writer’s Award, a fellowship from the National Endowment for the Arts, and a Pushcart Prize, and is the Poetry Editor for Image, and a Contributing Editor for West Branch. Although he now lives in New York City, and teaches at Columbia University, he was born in Portland, Oregon, and has lived there, as well as in Texas, California, Florida, Iowa, Massachusetts, and Ohio.

Ten Questions at Poets & Writers
McCrae on his poem “Still When I Picture It the Face of God Is a White Man’s Face”
Find Shane McCrae on Twitter at: @akasomeguy