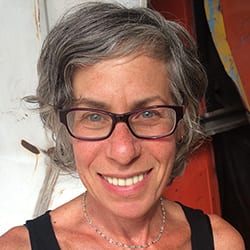 Shari Mendelson is a sculptor living and working in Brooklyn and upstate New York. Mendelson mines art history for intriguing objects that become the source of inspiration for her work. She’s especially drawn to ancient Greek, Roman, and Islamic glass and ceramic objects. With equal parts reverence and play, she reinterprets these ancient works using recycled plastic bottles. Conceptually, her interest is in the dialogue between the rare, ancient works we value in museums and our contemporary throw-away plastic culture. Formally, her interest is in the exploration of structure, scale, texture, color, opacity and translucency. In a 2016 review in “Hyperallergic” of her solo show “Artifacts”, Stephen Maine wrote, “Excavation is a potent metaphor for the artist’s studio activity, and Mendelson’s artifacts emerge from her subconscious as much as from her enthusiasm for her subject matter. In turn, they appeal to something preconscious in the viewer.”

Mendelson has been the recipient of three New York Foundation for the Arts Fellowships (1987, 1997, 2011), and a Pollock Krasner Foundation Grant (1989). She has been artist-in-residence at The Toledo Museum of Art, Toledo, OH (2017), The Studio at The Corning Museum of Glass, Corning, NY (2015), The Bau Institute/Camargo Foundation in Cassis, France (2014), and UrbanGlass in Brooklyn, NY (2014). She has had solo exhibitions at Todd Merrill Studio, Pierogi, Black + Herron Space, NYC, John Davis Gallery, Hudson, NY, and participated in numerous two-person and group exhibitions at museums and galleries including The Brooklyn Museum, Roger Williams University, Bristol, RI, Marymount Manhattan College, NY, and The Museum of Old and New Art, Tasmania, Australia. Her work is in the permanent collection of The RISD Museum, Providence, RI, The Museum of Fine Arts, Boston, MA, Cooper-Hewitt Museum, NY, The Museum of Old and New Art, Tasmania, Australia, and The U.S. State Department.

Her work has been featured in publications including in the New York Times, Hyperallergic, Ceramics Now, Glass Quarterly, NY Arts, and Art on Paper.