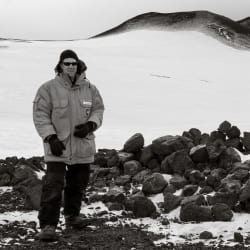 Shaun O’Boyle studied architecture at Parsons School of Design and has worked both as a photographer and in the architecture/design field for the past 30 years. Formative experiences include working with his father who was a master carpenter; and at a shipbuilding yard on the Mississippi River between high school and college. He has traveled and photographed on all seven continents and has shown work in galleries and museums in Boston and the Berkshires in MA. His work has appeared in various publications and books including Smithsonian Magazine, Lenswork, Next City and Exit. His book Modern Ruins, Portraits of Place in the Mid-Atlantic Region was published in 2009 by Penn State University Press, and he has designed and self-published eight books of his photographs.

Photographing regions where human culture and history have shaped a unique architecture, infrastructure and landscape is a driving force behind this work. The capacity of architecture and the landscape to engage history and narrative is central to the work. In 2015 and again in 2017 Shaun participated in the National Science Foundation’s Antarctic Artists and Writers program where he photographed the built environment of Antarctica, concentrating on how architecture has shaped place on the vast landscapes of Antarctica. It is a study of architecture as shelter and scientific instrument, as container of memory on a continent almost devoid of human history.

Work on this project will continue with the NSF in the Palmer Station region of Antarctica, and, through the Guggenheim Fellowship, in regions of the Arctic including Svalbard, Iceland, and Canada. The Berkshire Museum in Pittsfield, MA, and the Peary-MacMillan Arctic Museum are exhibiting this work.