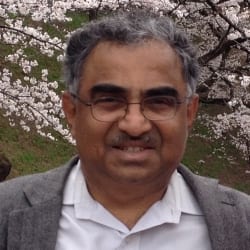 Shrinivas (“Shri”) R. Kulkarni is a George E. Hale Professor of Astronomy and Planetary Science at California Institute of Technology. He received an MS in Physics from the Indian Institute of Technology, Delhi In 1978 and a Ph. D. in Astronomy from University of California Berkeley (UCB) in December 1983. Following a post-doctoral fellowship at Berkeley and a Millikan Fellowship, he joined Caltech faculty in 1987. To date, he has mentored 29 graduate students and 40 postdoctoral fellows.

Kulkarni’s approach to research is to identify emerging areas of astronomy or use new methodologies that can be applied to existing areas of research. For his thesis, under the supervision of Carl E. Heiles, he developed an air-linked interferometer at the Arecibo Observatory and developed a new mode for the then newly commissioned Very Large Array and both were applied to study the diffuse neutral interstellar medium of our Galaxy. Towards the end of his thesis, working with Donald C. Backer, Kulkarni discovered the first millisecond pulsar at the Arecibo Observatory. As a Millikan Fellow he discovered optical counterparts to binary pulsars — a discovery which upturned the conventional wisdom that magnetic fields in neutron stars decay with time. He led or participated in the following discoveries: the first pulsar in a globular cluster, the first brown dwarf, suggesting a Galactic origin for soft gamma-ray repeaters and establishing the extra-galactic nature of gamma-ray bursts.

Over the past decade Kulkarni focused on systematic exploration of the night sky. The first phase was the Palomar Transient Factory (PTF) and was based on 8 square degree camera at the Samuel Oschin telescope. The second phase had, in addition, a robotic spectrograph on the Palomar 60-inch telescope. This effort culminated in the Zwicky Transient Facility which is centered around a 47 square degree camera on the Oschin telescope. ZTF is supported by a generous grant from the National Science Foundation and seven universities around the world as well as contributions from DOE laboratories. The notable discoveries from PTF and iPTF include identifying the emerging class of super-luminous supernovae, clarifying the origin of type Ia supernovae, detecting gamma-ray bursts without a gamma-ray trigger, showing a link between tidal disruption events (which are thought to be disruption of stars by massive black holes at the centers of galaxies) and “E+A” galaxies, demonstrating the methodology of “flash spectroscopy” to trace circumstellar matter around massive stars and assembling samples of Calcium-rich supernovae, rapidly spinning asteroids, etc.

Kulkarni, as of March 2018, has over 500 refereed papers to his credit with 63 papers in Nature and six in Science. The “h” index stands at 103 and the total number of citations is in excess of 42,000. He has received many awards with the most notable being the NSF Waterman Award and the Dan David Prize. Kulkarni is a fellow of the Royal Society of London, the US National Academy of Sciences, the Indian Academy of Sciences and the Royal Netherlands Society of Arts & Sciences.