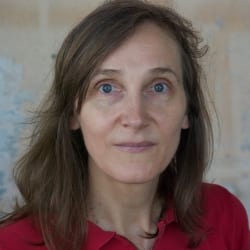 A filmmaker, artist and animator Signe Baumane is known for her provocative films on array of narrative themes including sex, the body, pregnancy, love, marriage and depression. Many of her films are unapologetically personal and told from a strong female point of view.

For Signe animation is a perfect medium to tell layered, complicated stories. She is fascinated by the ability of animation to incorporate different art forms. Her latest projects – the feature films “Rocks in my Pockets” and “My Love Affair With Marriage” - fuse animation with music, theater, science, photography, lighting, three-dimensional sets and traditional hand-drawn animation.

Signe is a New York Foundation for the Arts Fellow in Film, a three-time recipient of New York State Council on the Arts grants, and two-time recipient of Jerome Foundation grants. Her 16 animated shorts have screened collectively at over 300 film festivals around the world including Berlinale, Sundance and Annecy. Her animated feature film “Rocks In My Pockets” premiered at Karlovy Vary International Film Festival in 2014, where it received a FIPRESCI Prize. The film went to over 150 film festivals and had a theatrical release in the US through Zeitgeist Films. It continues to screen in colleges and mental health organizations.

Her new animated feature film, “My Love Affair With Marriage”, infuses Music and Science into a personal Love story. The film examines the biological chemistry of love and gender, as well as societal pressures on an individual to conform to the social mores of the times.

Born in Latvia and educated in Moscow, Signe lives and works in Brooklyn, NY.

Links to some of Signe's work:

"Teat Beat of Sex" (2008) A take on sex from a woman’s point of view
"Birth" (2009) Amina (17) is pregnant and afraid to give birth. For consolation and advice she goes to older women, but their stories scare her even more.
Trailer of "Rocks in my Pockets" (2014) A 100-year history of Signe’s family’s battles with depression
Feature Film,"Rocks in My Pockets" (2014) website
Sample footage of work-in-progress "My Love Affair With Marriage" (2017)