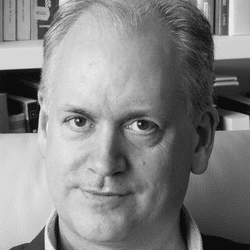 Simon R. Doubleday is Professor of Medieval History at Hofstra University. He received his undergraduate degree from Pembroke College, Cambridge, and his doctorate from Harvard. His books include The Lara Family: Crown and Nobility in Medieval Spain (Harvard University Press, 2001) and The Wise King: A Christian Prince, Muslim Spain, and the Birth of the Renaissance (Basic Books, 2015). He co-edited Border Interrogations: Questioning Spanish Frontiers, with Benita Sampedro Vizcaya (Berghahn, 2008), In the Light of Medieval Spain. Islam, the West, and the Relevance of the Past, with David Coleman (Palgrave, 2008), and Why the Middle Ages Matter: Medieval Light on Modern Injustice, with Celia Chazelle, Felice Lifshitz, and Amy Remensnyder (Routledge, 2011). He is completing a video lecture series for The Great Courses entitled "After the Plague: How Europe Recovered from the Black Death," co-editing a volume on Galicia in the age of Alfonso X, and co-authoring with Bernard F. Reilly a book on the eleventh-century kingdom of León. He is founding editor of the Journal of Medieval Iberian Studies, and former president of the American Academy of Research Historians of Medieval Spain. He lives in Astoria, Queens, and in Santiago de Compostela, Galicia.