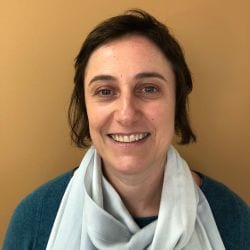 Snežana Stanimirović is a Professor of Astronomy at the University of Wisconsin, Madison. She is originally from Serbia, was born in Kruševac but grew up in Surdulica.

While in high school Snežana enjoyed greatly her first research experience in astronomy at the Petnica Research Center. She then studied in Belgrade, receiving a B.S. degree in Mathematics and Astronomy in 1996 from the University of Belgrade, Serbia. She received a PhD in Astronomy & Astrophysics in 2000 from the Center for Astronomy, University of Western Sydney, Australia, where she spent a lot of time at the CSIRO’s Astronomy and Space Science headquarters.

Snežana is an observational astrophysicist using international radio and infrared telescopes with the aim of understanding the initial conditions for star formation in the Milky Way and nearby galaxies. She has worked on quantifying structure and kinematics of the nearby Small Magellanic Cloud, especially focusing on turbulent properties of neutral gas over a wide range of spatial scales.

She has studied properties of gas clouds in the Magellanic Stream, a tidal tail formed in interactions between the Magellanic Clouds and the Milky Way. She was one of the leaders of the successful large survey project (GALFA-HI) with the Arecibo Observatory that led to a new understanding of the Milky Way gaseous disk, halo, and the flow of gas between them. Her studies of the highly extended atomic envelopes around nearby stellar nurseries have tested theories of molecule formation and the importance of dust for shielding molecules from the harsh interstellar radiation. More recently she and her research group have focused on constraining the temperature distribution of neutral gas in the Milky Way using the Karl G. Jansky Very Large Array.

Snežana has worked extensively on characterizing and understanding properties of the smallest interstellar clouds and their importance for dissipation of turbulent energy.

In 2018, she co-authored a review article on microstructures in the interstellar medium for the Annual Review of Astronomy and Astrophysics.

Stanimirović’s research and educational efforts have been recognized with a National Science Foundation CAREER award and a Cottrell Scholar award by the Research Corporation for Science Advancement. In 2016 she was elected as a Fellow of the American Association for the Advancement of Science.

Her other awards include election to Sigma Xi, the Vilas Associate award by the University of Wisconsin, and several research grants from the National Science Foundation and NASA. The Guggenheim fellowship will allow Snezana to work with her collaborators on constraining the initial steps in the formation of interstellar molecules using the Atacama Large Millimeter Array, and characterizing the growth and evolution of giant molecular clouds.

Profile photograph by Lorena Do Carmo