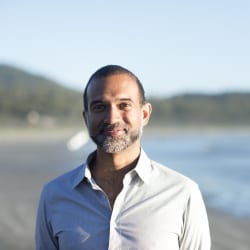 Srikanth Reddy is the author of Voyager, which was named one of the best books of poetry in 2011 by The New Yorker, The Believer, and National Public Radio. His previous collection, Facts for Visitors, won the 2005 Asian American Literary Award for Poetry. A book of literary criticism, Changing Subjects: Digressions in Modern American Poetry, was published by Oxford University Press in 2012.

Reddy plans to complete a third book book of poetry, Underworld Lit, with support from the Guggenheim Foundation. This extended sequence is cast in the form of fragmentary lecture notes for an imaginary course in the humanities, weaving together elements of academic satire, a survivor’s memoir, translations from obscure works of world literature, and a Borgesian journey through the underworlds of various cultures.

In addition to the Guggenheim Foundation, the National Endowment for the Arts and the Creative Capital Foundation have awarded Reddy grants and fellowships, and in fall 2015, he delivered the Bagley Wright Lectures in Poetry. A graduate of the Iowa Writers’ Workshop and the doctoral program in English at Harvard University, he is currently an Associate Professor of English at the University of Chicago.