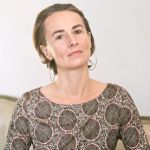 Stacey D’Erasmo is the author of three novels. Her first novel, Tea (Algonquin, 2000), was selected as a New York Times Notable Book. Her second novel, A Seahorse Year (Houghton Mifflin, 2004), was named a Best Book of the Year by the San Francisco Chronicle and Newsday and won both a Lambda Literary Award and a Ferro-Grumley Award. Her third novel, The Sky Below, was published by Houghton Mifflin Harcourt in January 2009. Ms. D'Erasmo's articles and podcasts have been published in the New York Times Book Review, New York Times Magazine, Ploughshares, and the Los Angeles Times. She has been a faculty member at the Breadloaf Writers Conference in 2007 and 2008.

Ms. D’Erasmo received a B.A. from Barnard College and an M.A. from New York University in English and American Literature. From 1988 to 1995, she was a senior editor at the Voice Literary Supplement. She was a Stegner Fellow in Fiction at Stanford University from 1995 to 1997. She created and developed the fiction section of Bookforum from 1997 to 1998.
She is currently an assistant professor in the writing program at Columbia University’s School of the Arts.

During her term as a Guggenheim fellow, she will be researching and writing her fourth novel, tentatively titled Wonderland.