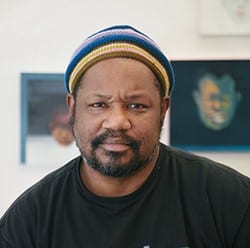 Steve Locke was born in Cleveland, Ohio, and raised in Detroit, Michigan. He received his M.F.A. in 2001 from Massachusetts College of Art and Design and attended Skowhegan in 2002. He has had residencies with the City of Boston (2018), the Isabella Stewart Gardner Museum (2016), and The MacDowell Colony (2015). He has received grants from Pollock-Krasner Foundation, Louis Comfort Tiffany Foundation, and Art Matters Foundation. He has had solo exhibitions at the Institute of Contemporary Art, Boston and the Museum of Contemporary Art Detroit. He has done projects with ForFreedoms, Kickstarter, the Boston Public Library, the Gardner Museum and P.S. Satellites/Prospect IV in New Orleans and has had gallery exhibitions with yours mine & ours, Samsøñ, Gallery Kayafas, and Mendes Wood. His work has been reviewed in ARTFORUM, Art in America, Art New England, JUXTAPOZ, The Boston Globe, and The New Yorker. Currently a Professor at Pratt Institute, Steve is a painter whose work lives at the intersections of portraiture, identity, and modernism. He uses painting' ability to direct the gaze to help us look critically and unflinchingly at our shared history. His work can be seen at www.stevelocke.com Photo Credit: Joanna Eldredge Morrissey