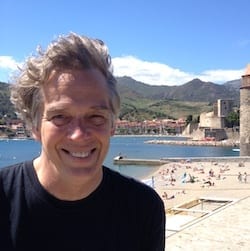 Steven P. Hopkins is Mari S. Michener Professor of Religion and Coordinator of Asian Studies and Medieval Studies at Swarthmore College in Pennsylvania. His major field is South Indian Hinduism with special attention to the work of medieval South Indian saint-poet and philosopher Veṅkaṭanātha (Vedāntadeśika), though he has published widely in the area of comparative religious literatures, including the themes of love, ideal bodies, and particularity, lamentation as ethical witness, and female lament in the poetry of William Blake. In addition to The Flight of Love: A Messenger Poem of Medieval South India by Veṅkaṭanātha (Oxford 2016), An Ornament for Jewels: Love Poems for the Lord of Gods (Oxford, 2007), and Singing the Body of God (Oxford University Press, 2002), Hopkins co-edited a book with John B. Carman entitled Tracing Common Themes: Comparative Courses in the Study of Religion (Scholars Press, 1990). Hopkins has received fellowships from the Fulbright Foundation, the NEH, the American Institute of Indian Studies, and was awarded the 2010 A.K. Ramanujan Book Prize for Translation and the Eisner Prize in Literature (for Poetry), UC Berkeley (1986). He is currently working on a comparative study of women’s laments in early Greek, Greek Christian, Hindu and Buddhist literatures.