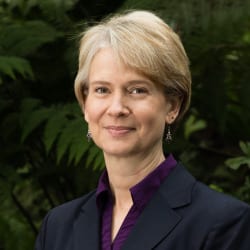 One of the few veterinarians in the world with a degree in history of science, Susan D. Jones is a professor in the Program in History of Science and Technology, and the Department of Ecology Evolution and Behavior at the University of Minnesota—Twin Cities. Her research concentrates on the sociocultural history of veterinary medicine and disease ecology, especially for zoonoses (diseases transmitted between animals and humans).

She is the author of several articles and two books: Valuing Animals: Veterinarians and their Patients in Modern America; and Death in a Small Package: A Short History of Anthrax (named one of the “Outstanding University Press Books of 2010” by critic Peter Skinner of Foreword Reviews). She has served on several national and international boards and committees; has been invited to lecture in Vienna, Beijing and Cambridge; and has won awards from the U.S.-U.K. Fulbright Commission and the National Science Foundation.

She will use her Guggenheim Fellowship to work on a new book titled Plague Homelands: Disease and Colonialism in the Eurasian Borderlands. Focusing on the ancient cradle of bubonic plague in Eurasia, the book explores how local people and Soviet-era scientists understood plague’s human-animal ecology and tried to control the disease. The history of plague in its Eurasian homeland holds many lessons as we struggle to balance the health of people with the health of ecosystems today.