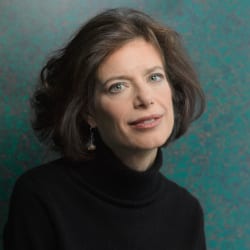 Susan Faludi is a Pulitzer-Prize winning journalist and a longtime writer on women’s rights and gender issues. She is the author of the bestselling Backlash: The Undeclared War Against American Women, which won the National Book Critics Circle Award for Nonfiction, Stiffed: The Betrayal of the American Man, and The Terror Dream: Myth and Misogyny in an Insecure America. Her most recent book, In the Darkroom, a memoir of her transgender father and a meditation on identity in its many and conflicting forms, won the 2016 Kirkus Prize for Non-Fiction and was named one of the top ten best books of the year by The New York Times.

Backlash, published in 1991, played a formative role in the revival of a national discussion about feminism. The book punctured popular myths about the “costs” of women’s independence that have been repeatedly deployed to discourage women from pursuing equality. In Stiffed, published in 1999, Faludi turned her attention to the social pressures placed on men, analyzing the contemporary forces that warp men’s lives and attitudes. Her 2007 book, The Terror Dream: Myth and Misogyny in an Insecure America, dissected the post-9/11 American psyche in the media, popular culture and in political life.

A former reporter for The Wall Street Journal, where she won the Pulitzer Prize for Explanatory Journalism for her story about the human consequences of the leveraged buyout of Safeway Stores, she has written for many publications, including The New Yorker, The New York Times, Harper’s, The Nation and The Baffler. “Journalism is her splendid trade,” John Leonard wrote of her in Newsday. “Susan Faludi listens like a tuning fork, and picks up unseen vibrations. There’s not a subject that she touches on that she doesn’t illuminate in prose as graceful as a gazelle.”