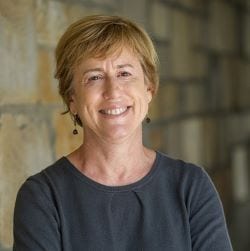 I have been on the faculty at the University of Michigan since 1992, and was honored in 2014 to be named the Rhys Isaac Collegiate Professor of History. My publications include Sacred Violence in Early America (2016), Empires of God: Religious Encounters in the Early Modern Atlantic (co-edited with Linda Gregerson, 2011), Doomsayers: Anglo-American Prophecy in the Age of Revolution (2003), and Disorderly Women: Sexual Politics and Evangelicalism in Revolutionary New England (1994). My Guggenheim project, “A Common Grave: A Material History of Catholics in English America,” is a study of a fugitive faith on the edges of empire. By the time England entered the imperial game in the early 1600s, its Protestant identity was firmly rooted in law and politics. Catholics lived a twilight existence, adept at concealing themselves, their priests, and their sacramental practices from prying eyes. My project explores the spiritual, emotional and material resources available to “papist” emigrés as they sought to build new congregations and patterns of worship in a “new world” of indigenous lands and peoples. With a faint paper trail to follow, material traces – rosaries, pocket-sized crucifixes smuggled in bags, tombstone inscriptions – can offer a new window into the lives of this notoriously invisible community. Photo Credit: Leisa Thompson