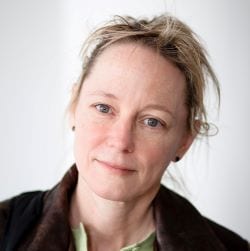 Suzanne Bocanegra employs theater to interrogate the history and practice of visual art, using large-scale video, performance and installation, as well as collage, sculpture and painting.

Bocanegra is the recipient of the Robert Rauschenberg Award from the Foundation for Contemporary Arts (2020), a Smithsonian Artist Research Fellowship (2013), a Danish Arts Council Fellowship (2007), the Rome Prize (1990), and grants from