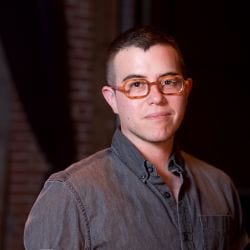 Current projects include Trainers, developed at The Ground Floor at Berkeley Rep; and High Winds, co-created with graphic designer Jessica Fleischmann (X Artists’ Books, 2017). Oswald has since adapted High Winds for performance featuring music by Jerome Ellis and has begun to present the show at venues such as Abrons Arts Center and the LAX Festival produced by Los Angeles Performance Practice. Other recent work includes the lo-fi semi-improvised web series Outtakes starring Becca Blackwell and Zuzanna Szadkowski, and the play A Kind of Weather, which will receive its world premiere at San Diego’s Diversionary Theatre in 2020.

Awards include a Thom Thomas Award for Playwriting from the Dramatists’ Guild Fund, a Rosati Fellowship from Duke University Libraries, the Dorothy Strelsin Playwriting Fellowship from Soho Rep, a Jerome Fellowship from The Playwrights' Center in Minneapolis, as well as residencies with The Bau Institute/Camargo Foundation, The MacDowell Colony, The Millay Colony for the Arts, Sundance/Ucross, and Yaddo.

Oswald co-created Play A Journal of Plays and has published critical writing at Riting.org, 3-HolePress.org, Howlround, PAJ, and micro-plays in collections such as Imagined Theatres (Routledge) and The Best American Non-Required Reading 2014. He is an affiliated writer at The Playwrights’ Center, an associated artist at Clubbed Thumb and New Georges, and an alumnus of New Dramatists. Since 2014, Oswald has been based in Los Angeles where he is an assistant professor of playwriting at UCLA’s School of Theater, Film & Television.

As a Guggenheim Fellow, Oswald will write a text responding to Virginia Woolf’s Orlando from a trans perspective.