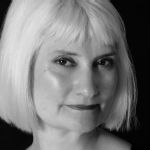 Terese Svoboda is the author of five novels, most recently Bohemian Girl, named one of the ten best 2012 Westerns by Booklist and an Historical Book of the Year Finalist in Foreword. "Astounding!" proclaimed The New York Post in a review of her memoir Black Glasses Like Clark Kent that won the Graywolf Nonfiction Prize and The Japan Times "Best of Asia 2008.” Vogue lauded her first novel, Cannibal, as a female Heart of Darkness. Svoboda is also the recipient of the Bobst Prize, the Iowa Prize for poetry,  the O. Henry Award for the short story, and a three-time winner of the New York Foundation for the Arts Fellowship. Her opera WET premiered at Disney Hall in Los Angeles in 2005. Her writing has been selected for the "Writer's Choice" column in The New York Times Book Review, a SPIN magazine book of the year, and one of the Voice Literary Supplement's ten best reads and has appeared in the New Yorker, the Atlantic, Paris Review, Narrative, One Story, American Poet, Poetry, Times Literary Supplement, Tin House, Yale Review, Slate, Chicago Tribune, and the New York Times. Tin God, a finalist for the John Gardner Prize, is being reissued this spring, with Publisher's Weekly deeming her a “fabulous fabulist.” She is also the author of five books of prize-winning poetry and Cleaned The Crocodile's Teeth, translations from the Nuer, a South Sudanese language. She has enjoyed residencies at Bellagio, Bogliasco, Yaddo, MacDowell, and Ossabaw. Her academic positions have been at Williams, Columbia School of the Arts, William and Mary, San Francisco State, Bennington, Sarah Lawrence, New School, the Universities of Tampa, Miami, and Hawaii, as well as in St. Petersburg and Nairobi for the Summer Literary Seminars.