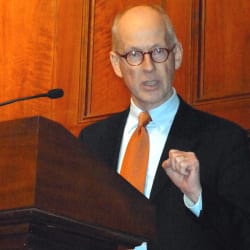 Theo van den Hout has always been fascinated by the many aspects of writing. A scholar studying the Hittites (ca. 1650-1200 BC), one of the Middle Eastern powers in ancient Anatolia (modern-day Turkey), he focuses on the development and social history of their two writing systems: the borrowed cuneiform and the indigenous “hieroglyphs.” With the support of the Guggenheim Fellowship he will finish a comprehensive monograph covering the initial adoption of the Mesopotamian cuneiform script, the simultaneous development of their own “hieroglyphic” system, their development over time, questions of literature and literacy vs. orality, scribal milieus, the nature and workings of the tablet collections, and their housing in the Hittite capital.

Theo van den Hout received his B.A. from the University of Amsterdam, the Netherlands, his M.A. from the University of Leiden, and he studied for a year at the Ruhr-Universität in Bochum, Germany, with a stipend from the Deutscher Akademischer Austauschdienst, before finishing his dissertation (1989) in Amsterdam again. After seven years as a high-school teacher of Greek and Latin and two years as a Research Associate at Chicago he became a Professor of Hittite and Anatolian Languages at his alma mater. In 2000 he moved permanently to the Oriental Institute of the University of Chicago where he is now the Arthur and Joann Rasmussen Professor of Western Civilization and Hittite and Anatolian Languages, and where he directs the Chicago Hittite Dictionary project. Theo is also a Corresponding Member of the Royal Dutch Academy of Arts and Sciences, and Senior Fellow of the Institute for the Study of the Ancient World at New York University.

For a full listing of publications see academia.edu.